Protecting Our Children in the Digital Age

Accessibility to the Internet is much more freely available to children in modern times.  In order to make parents aware of the potential dangers and appropriate security measures to take in order to protect our young people, our Parent’s Association kindly organised and part-funded a talk for parents on November 28th by Jason O’Mahony from ‘Children of the Digital Age’.  The presentation was a great success with nearly 50 parents in attendance and explored the world of the online predator and the harm that it can cause.  An internet safety input was also given to pupils from 1st to 4th class which highlighted the importance of their Digital Footprint and putting personal information on the internet as well as an awareness of online games, social media and cyberbullying.  Children were encouraged to sign an internet pledge and they took home the code to discuss with their parents.  We received a lot of positive feedback on the talks and we would like to take this opportunity to say thank you to all those involved.  For more information and advice please click here http://childrenofthedigitalage.com

The EU funded Erasmus+ Project entitled ‘Euro Trading, Young Entrepreneurs on the Move’ is a two year programme from 2016 to 2018 which recently got underway in St. John’s when the Principal and two of our teachers travelled to Immingham in England for a transitional meeting to organise the next two years and to meet other project members from the five partner schools – England, Germany, Poland, Greece and Spain.

They were met by the Mayor of Immingham, Councillor Stewart Swinburn and the Mayoress Karen Swinburn at Coomb Briggs Primary School in Immingham where the teachers exchanged good practice and discussed similar projects from their own towns for example the Tidy Towns Project.  The visit was a great success and a great opportunity for teachers to exchange ideas.  They were very impressed with the town, the school and its facilities and the quality of teaching and learning and brought back stories and pictures to share with the school.

To read more about the Erasmus+ Projects, its aims and work processes and which classes are involved, please go to the Erasmus+ Page in the Projects Section or click on this link http://stjohnskenmare.ie/?page_id=1218

Once again, St. John’s took part in the Team Hope Christmas Shoebox Appeal.  There was a total of 168 shoeboxes collected from the school!  Thank you to all those who took part in the campaign!

Team Hope delivers over three million shoeboxes annually to children in some of the remotest and poorest parts of the world, to children who think they have been forgotton about.  But your kindness shows them that they haven’t.

Thank you to all those who helped to fill the boxes and give those less fortunate than ourselves a chance to smile this Christmas! 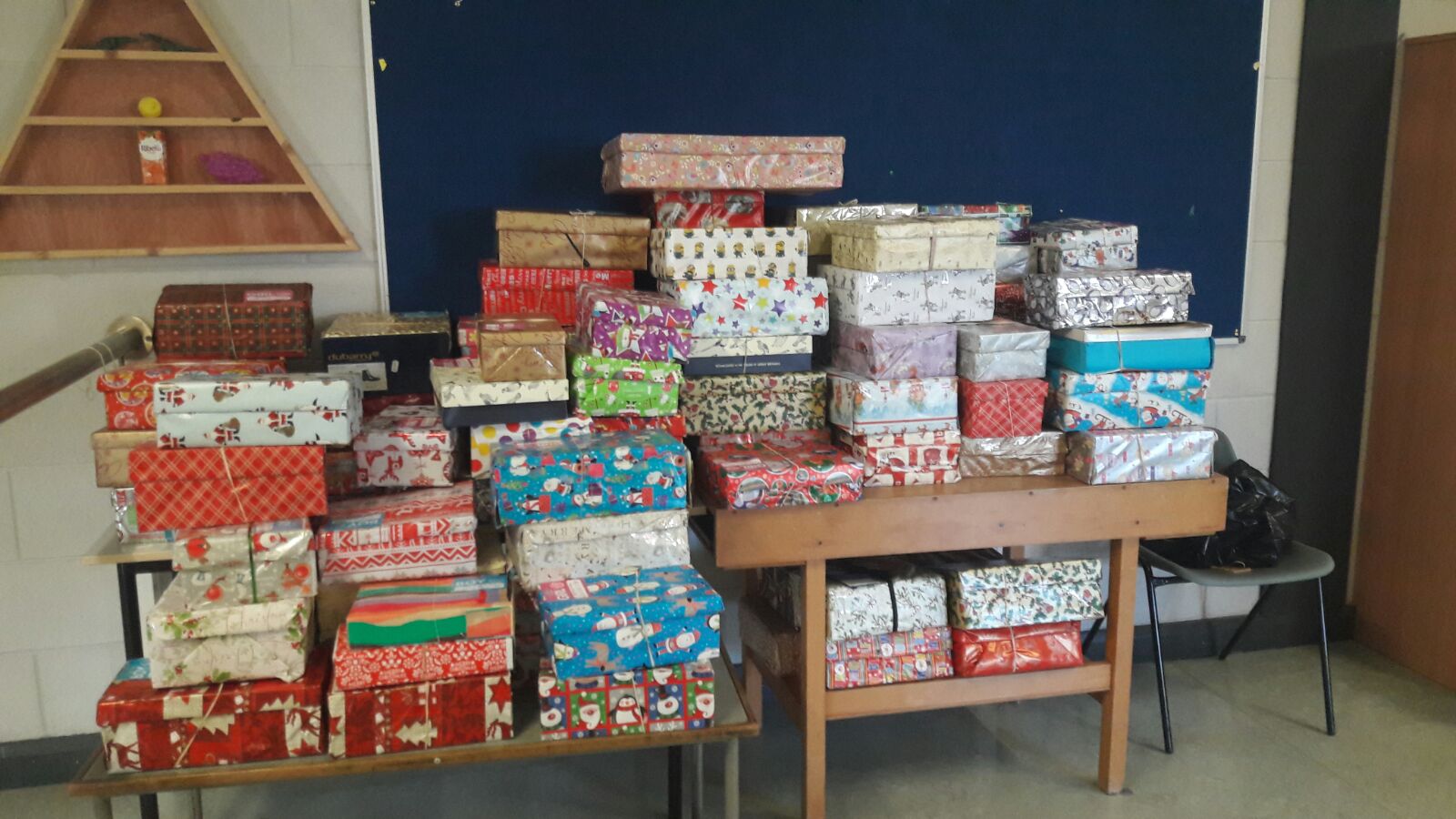 On Friday 18th November, 2016, St. John’s National School and members of Kenmare Community were delighted to present a cheque to the value of €2700 to AnneMaria O’Connor, the event Manager at Brú Columbanus.

AnneMaria was joined by Maura and Jerry Landers, Liz O’Sullivan, Kathlyn O’Brien and Carmel Horan, local volunteers who organised a quiz night in Brooklane Hotel, Kenmare which raised a total of €2166.  Principal Denis Courtney also contributed €534 on behalf on the pupils and parents of St. John’s National School who put a huge effort into the Halloween costume competition in aid of the charity.

Brú Columbanus is a voluntary organisation that provides accommodation for the relatives of seriously ill patients in any of the Cork hospitals or Hospice, especially relatives of sick children.

Well done to all involved and a big thank you to all who contributed!

Science Week took place in St. John’s from 13th-20th November. Science Week is an annual event which aims to make science more interesting and to encourage creativity and investigative skills in children.  It highlights how science, technology and engineering are hugely relevant to us all in our everyday lives.

Every class in the school embraced in science by questioning, observing, predicting, investigating, experimenting, measuring, analysing, recording and communicating.

Some of the infant classes engaged in activities such as exploring materials, for example clay, lego and blocks and investigated what materials would be good for building houses.  There were some great scientists among them!

First Class tested what happened to water when it is turned upside down in a glass and a seal formed!  There were some very interesting results!  They also make constructions out of marshmallows and tested the durability of the materials as well as constructing dinosaurs.

Fifth Class examined various materials and which would be appropriate to make different types of clothes.  They also looked at the idea of fair testing and how to make experiments fair and accurate.

Some other classes looked at differences between day and night, hot and cold and hard and soft.

Overall, we had a very interesting and interactive week!