KWD – Killarney Waste Disposal paid a visit to our school today and spoke to 3rd and 4th Class about the importance of recycling.  ‘KWD Kids Recycling’ helps to educate young people on how to recycle correctly.  They learned recycling habits and how to improve recycling quality so that less waste ends up in our landfills.

The pupils really enjoyed the talk and they all got a lovely magazine and certificate for their efforts.  Thank you KWD for a very informative workshop!

On Monday last each business gave a presentation to Mr. O’ Sullivan/Ms. Spillane’s 4th class and received extra funding for their idea.  In the afternoon, Conor Brosnan, Branch Manager of Bank of Ireland Kenmare and Robert Whyte of Whytes Centra Kenmare were invited to be ‘Dragons’ in a ‘Dragons Den’ style show.  They offered each business ‘bizbuck’ money for shares in their business.  Both the children and the dragons thoroughly enjoyed the event.

Mr. Morley and all the 4th class would like to thank Mr. Courtney and also Shane and Conor from Bank of Ireland for setting up these workshops as well as Robert Whyte for also partaking.  The children are invited to display their ideas at Friday night’s Enterprise Event in Pobalscoil Inbhear Scéine from 6pm.  As noted on the BizWorld website bizworldireland.org, “The skills children develop in BizWorld Ireland workshops are the most sought-after skills in the workforce today: creativity, collaboration, communication, teamwork and negotiation”.

Today, for Science Week, 3rd Class investigated if pressurised air could withstand force by placing a table on balloons and testing its strength.  All the children tried standing on the table but no one applied enough force to burst the balloons.  Then they had to bring out the big guns!  First Mr. Devane, then Master O’Sullivan and then Mr. O’Sullivan.  In the end, they tried both Mr. O’Sullivans together.  The balloons were put under serious pressure but miraculously, they never burst!  #TheBeautyOfScience!

Today we had a visit from Mr. D, an Engineer and Scientist who did workshops with the pupils from 3rd to 6th Classes for Science Week 2017.  The children investigated a variety of Science concepts and skills.  Mr. D otherwise known as Chuck Delpier is from Science Adventures and believes in Investigative Science with a hands-on approach.  The children engaged in a variety of experiments and challenges including working with batteries, tools, mechanics, light energy, kinetic energy and electrical energy.  The workshop was very informative and interesting as well as being a lot of fun!  Thanks Mr. D!

Once again, St. John’s took part in the Team Hope Christmas Shoebox Appeal.  This year, there were a total of 218 shoeboxes collected from the school, 50 more than last year’s 168!!  Thanks so much to everyone who took part in the campaign!  What an excellent outcome!

Team Hope delivers over three million shoeboxes annually to children in some of the remotest and poorest parts of the world, to children who think they have been forgotten about.  But your kindness shows them that they haven’t.  Thank you to all those who helped fill the boxes and give those less fortunate than ourselves a chance to smile this Christmas! 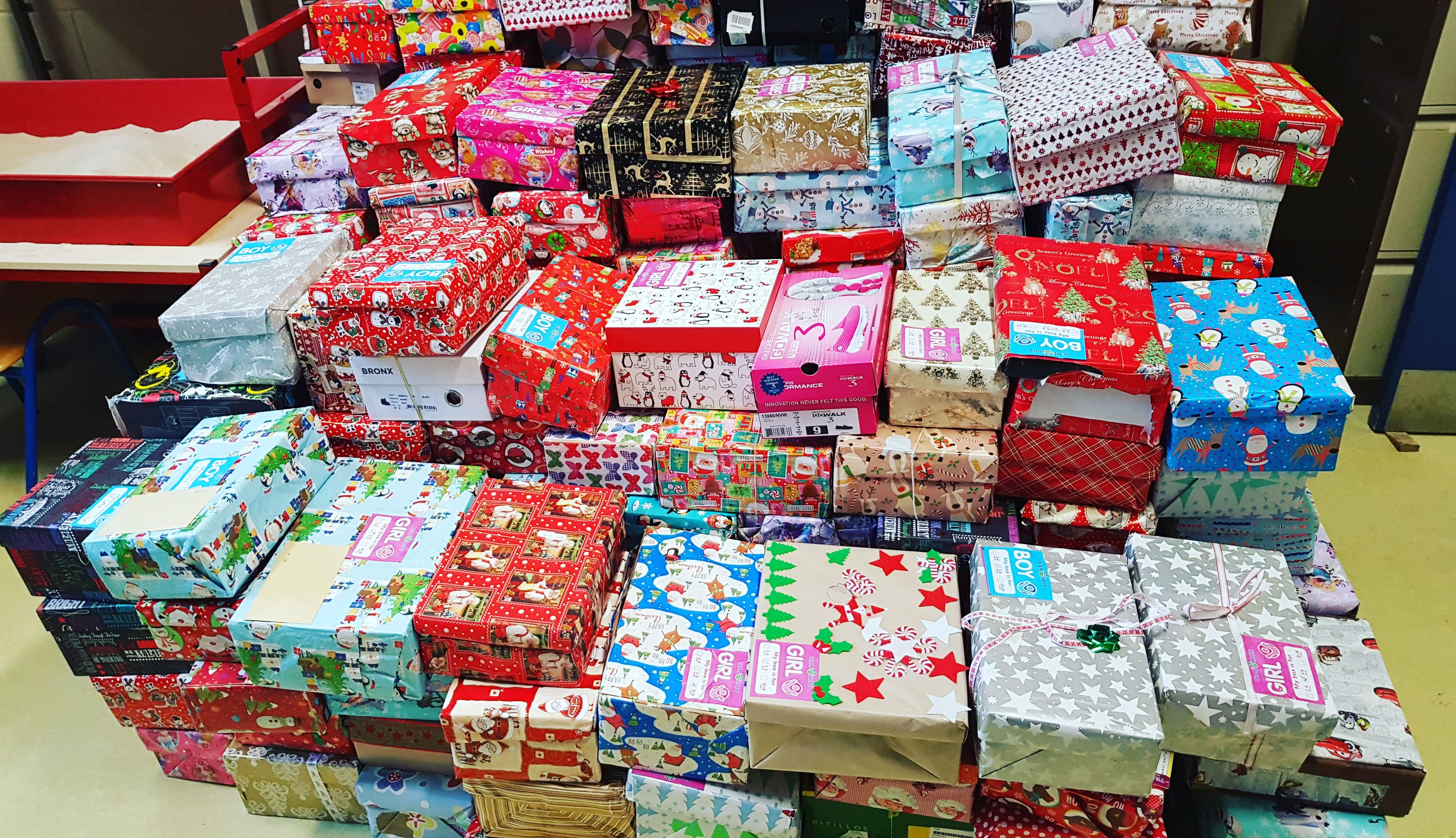 A Report on Tom Crean November 2017

Today, in school, Aileen Crean O’Brien and her partner Bill, came to speak to us about the legendary Tom Crean and their journey to complete the last treacherous leg of Aileen’s Grandfather Tom’s journey across the peaks and glaciers of South Georgia.

Tom Crean was born in 1877.  When he was a 15 years old, he borrowed a suit and some money and joined the Royal British Navy under-age.  He was a member of three major expeditions to Antarctica.  His first expedition was called ‘The Discovery’ and was led by Robert Falcon Scott (also known as Scott of the Antarctic).

On their second expedition to Terra Nova from 1911-1913, Robert Scott decided that when they were nearly at the South Pole, he would only send four men on with him and sent Tom Crean, Bill Lashly and Taff Evans back to base camp.  On his way back, Taff Evans suddenly collapsed as he was weak and had frost bite.  Tom Crean bravely chose to carry on back to base camp to get help.  Bill Lashly stayed with Evans.  Tom only had two biscuits and a bar of chocolate left and no water.  He had to climb mountains and go across treacherous frozen lakes for 56 kilometres.  He got help and saved the life of Evans which led him to receive the Albert Medal for Lifesaving.

His third expedition was on a three-masted ship called ‘Endurance’  which sank and Tom and the crew spent 492 days drifting on the ice before a journey to Elephant Island.  He, then made a 1500km journey from Elephant Island to South Georgia to find help for the stranded party.  Tom Crean died in 1938.

Tom Crean’s granddaughter Aileen decided she wanted to follow Tom’s footsteps and try and complete the last treacherous leg of Tom’s journey to South Georgia.  In 2016, Aileen, Bill and son’s Morgan and Cian set off on their journey.  It took them a year to train which included going to Poland skiing.  Bill didn’t know how to ski so he had to learn.  They built up their core strength by pulling tyres, hiking up mountains, learning how to use ropes, tie knots, learned how to pull each other out of crevasses and learned about all the gear and how to use it.

Five weeks into their journey, Aileen broke her leg tobogganing down a mountain.  She put out her foot to slow herself down and hit a rock.  They tied her to a sledge and brought her to the beach. The Navy came and brought her away but she wanted her sons to finish with Bill so they went on and she went to hospital.  She gave it her best shot.  They are back home now and they have written a book about their journey.

Thank you Aileen and Bill for sharing your story with us today.