We would like to say a special thank you to our special guests Tadhg Morley and Seán O’Sheá from the Kerry Senior Team and Amy Harrington and Aoife Crowley from the Kerry Ladies Under 14 Team for being in attendance at the ceremony.  Also, well done to our Active School Committee Darren Allman, Grace Foley, Gemmer Myer, Finn Murphy, Mark Foley and Adem Gul for their hard work all year.  Thanks to Danny Farkas for continuing the activities by holding Gymnastics in the hall all day and well done to all the students and teachers for making the school an active one and helping to achieve the flag!

We are pleased to announce that we have been awarded the Discovery Primary Science and Maths Award of (STEM) Excellence again this year!  To achieve this award, the pupils excelled with their skills and knowledge in the areas of Science, Technology, Engineering and Maths.

Throughout the year, our pupils carried out various activities such as hands on investigations in the areas of living things, energy and forces, materials and environmental awareness and care.  We held a Science week in November where each class engaged in Science by questioning, observing, predicting, investigating, experimenting, measuring, analyzing, recording and communicating.  We had Science Workshops in April with Mr. Zee, an Engineer and Scientist where the children investigated scientific concepts and were involved in activities such as designing and making go-carts, making roller coasters and battery powered cars.  We also had a visit from Shonagh Gray of SEAI (Sustainable Energy Authority of Ireland) in February who carried out workshops on the importance of energy conservation and we held a Maths Week in October.

Special thanks to Miss Lynch for coordinating the project and to the teachers for implementing fun and active Science and Maths lessons in their classrooms!  All the hard work paid off!  Well done all!

Below is a picture of some of our children receiving the award. 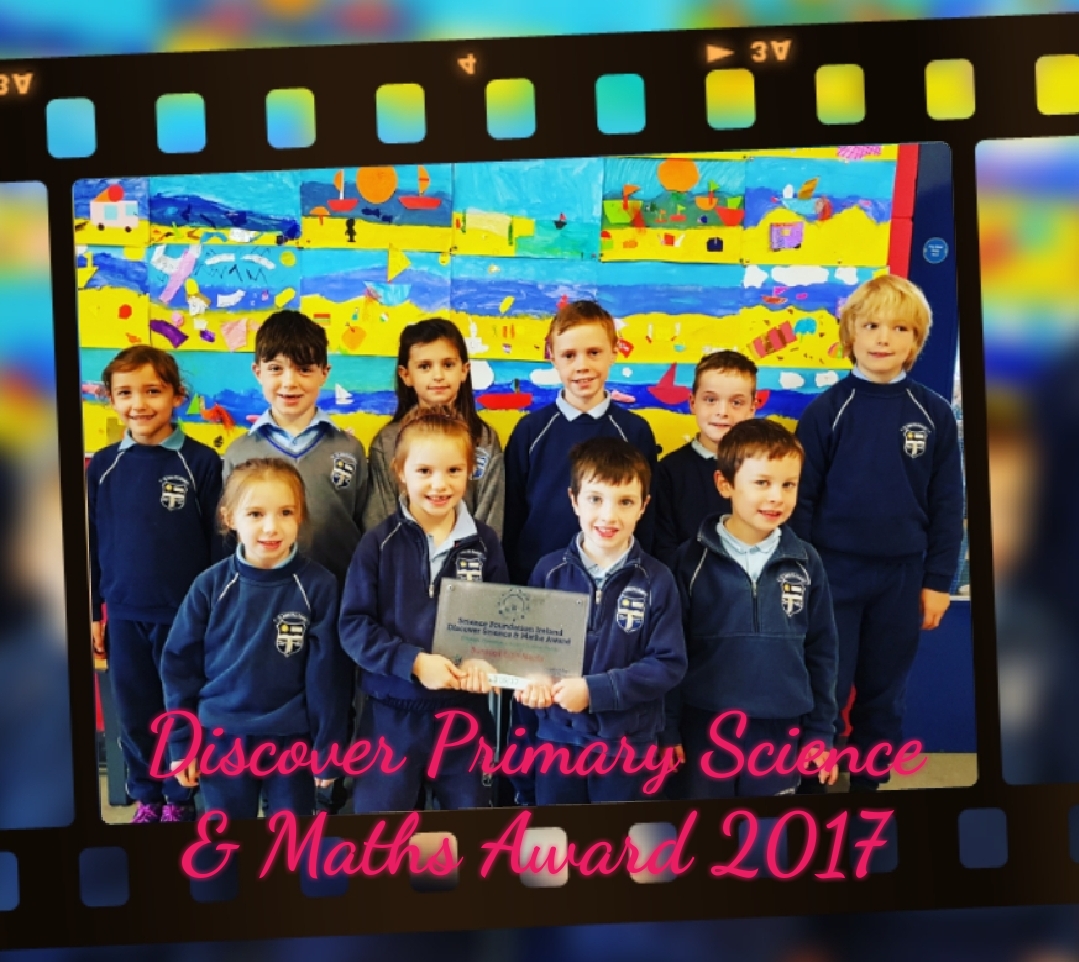 Below are pictures of our 3rd Class on their school tour to the Let’s Go Camp in Mallow on Wednesday 14th June.  A great day was had by all!

A big thanks to all the staff and instructors at The Kenmare Bay Health Club who have taken such good care of our third class over the past six weeks.  The children learned vital skills for swimming and had a great time in the process! 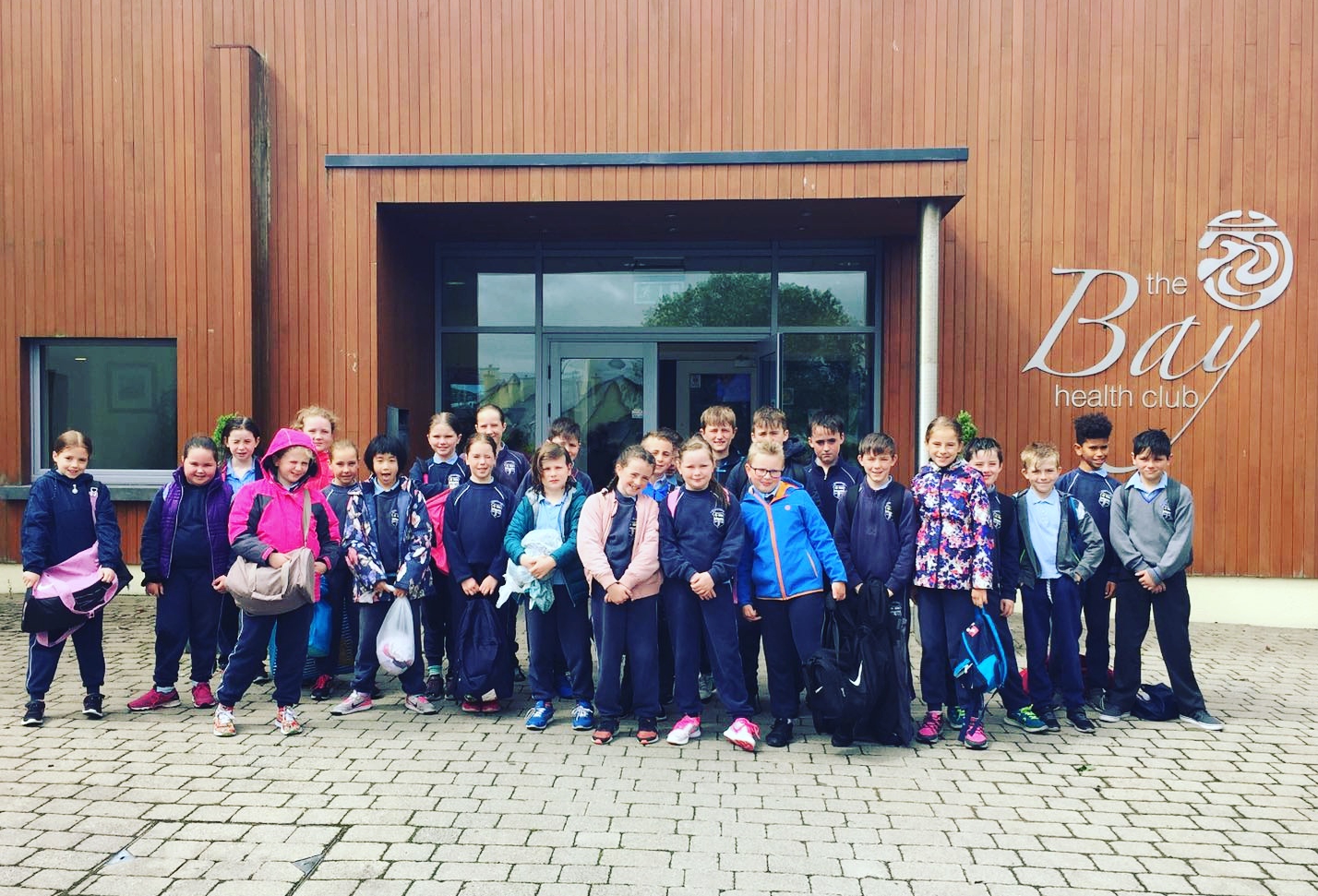 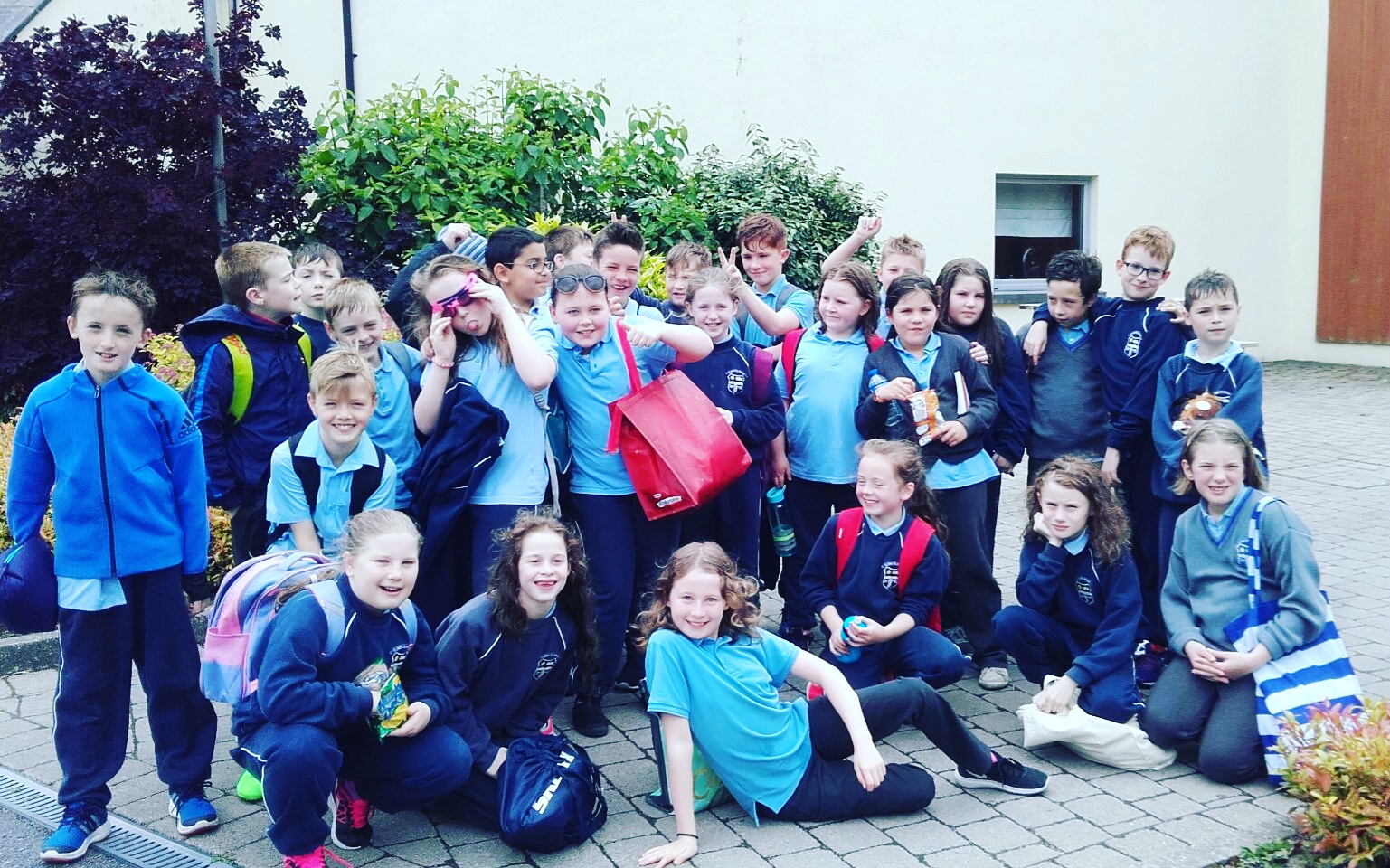 Congratulations to Adem Gul who represented Kerry in the Cumann na mBunscoil Primary Games at half time in last Sunday’s Munster Senior Football Semi Final between Kerry and Clare.  Adem did us proud by scoring a goal!  Well done Adem! 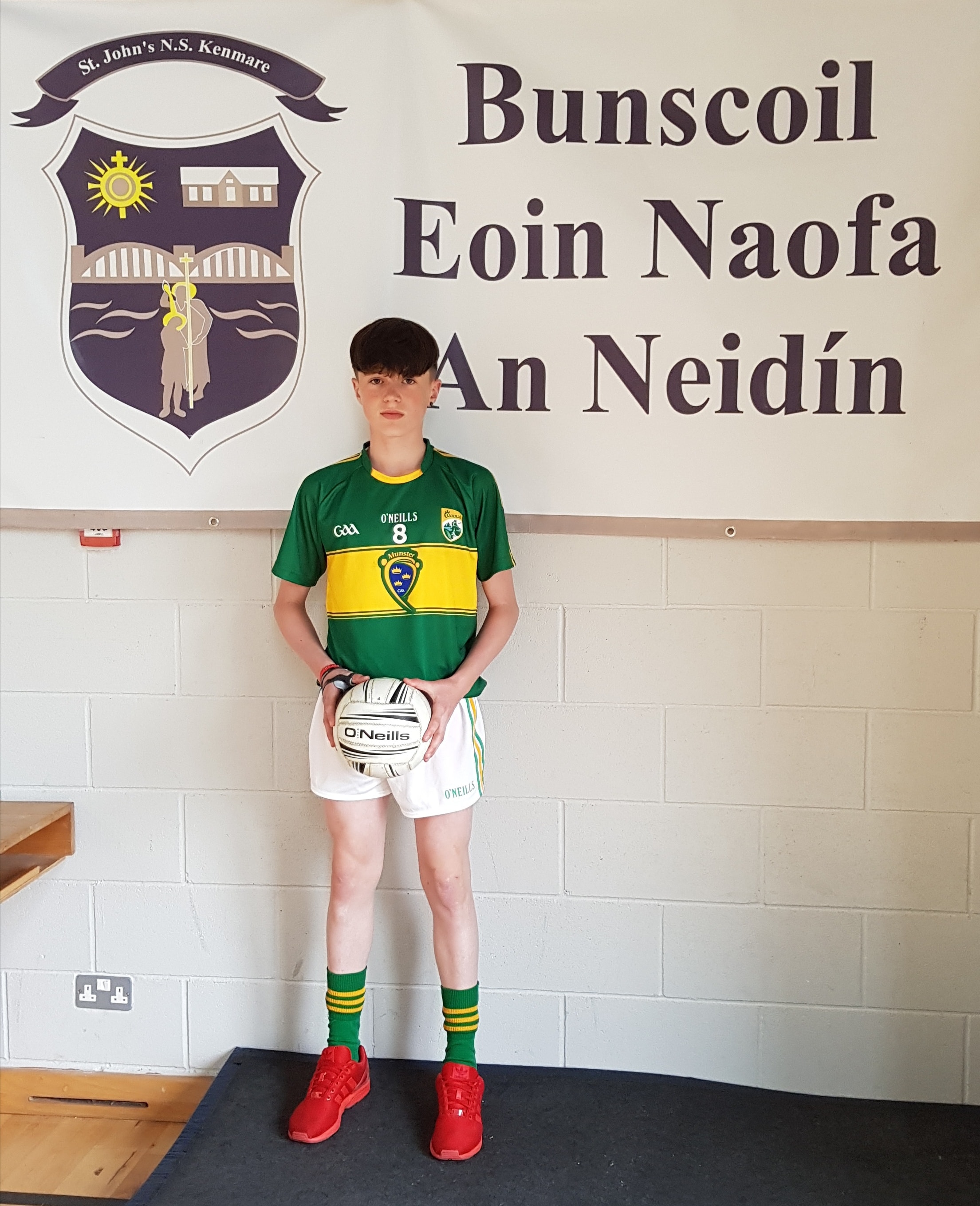 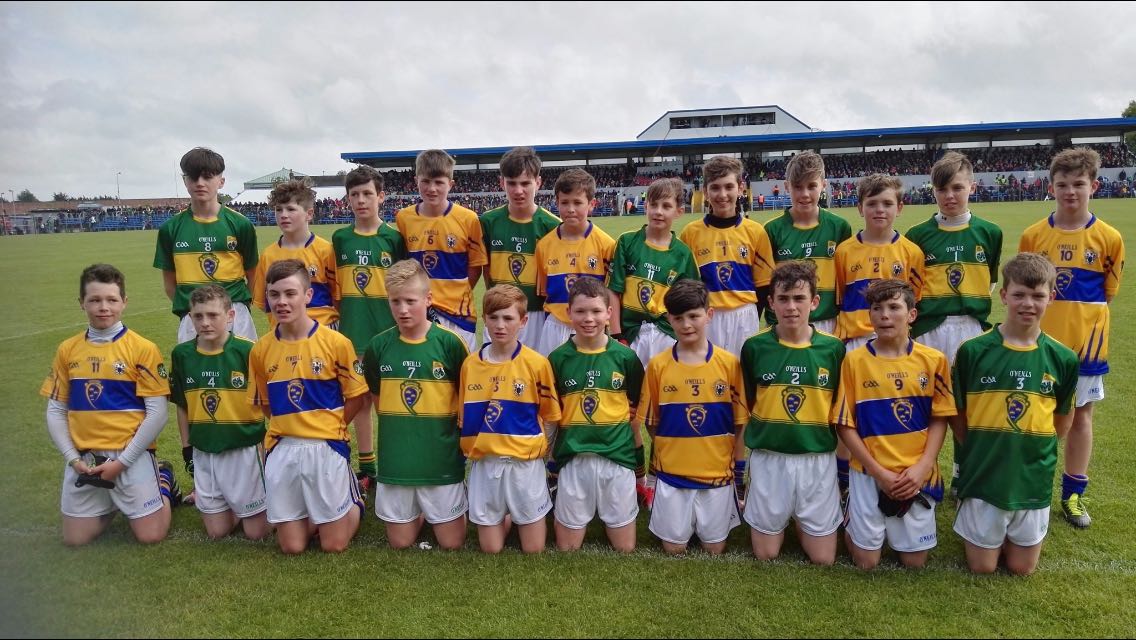 On Monday 12th June, we took part in the annual Garda 7’s football blitz which took place in Fitzgerald’s stadium in Killarney.  In all, sixteen Primary School teams took place on the day in what was an excellently organised event.  Our boys (and one injured girl!) did brilliantly, finishing top of their group, beating Boherbue N.S, Cullian N.S and Kilcummin N.S to progress to the quarter final against Rathmore N.S.  In a tight game, our lads dug deep to win by 5 points!  In the semi-final, we met a strong St. Oliver’s team and our lads fought to the bitter end but were unlucky to lose narrowly in the finish.  The team was Leon O’Sullivan, Darren Allman, Tom Crushell, Adem Gul, Dylan Wallace, Aidan Crowley, Darragh O’Sullivan, Yago Cornide, Donnacha Whelton, Ciaran Crowley, Senan Gul and Serena O’Sullivan. 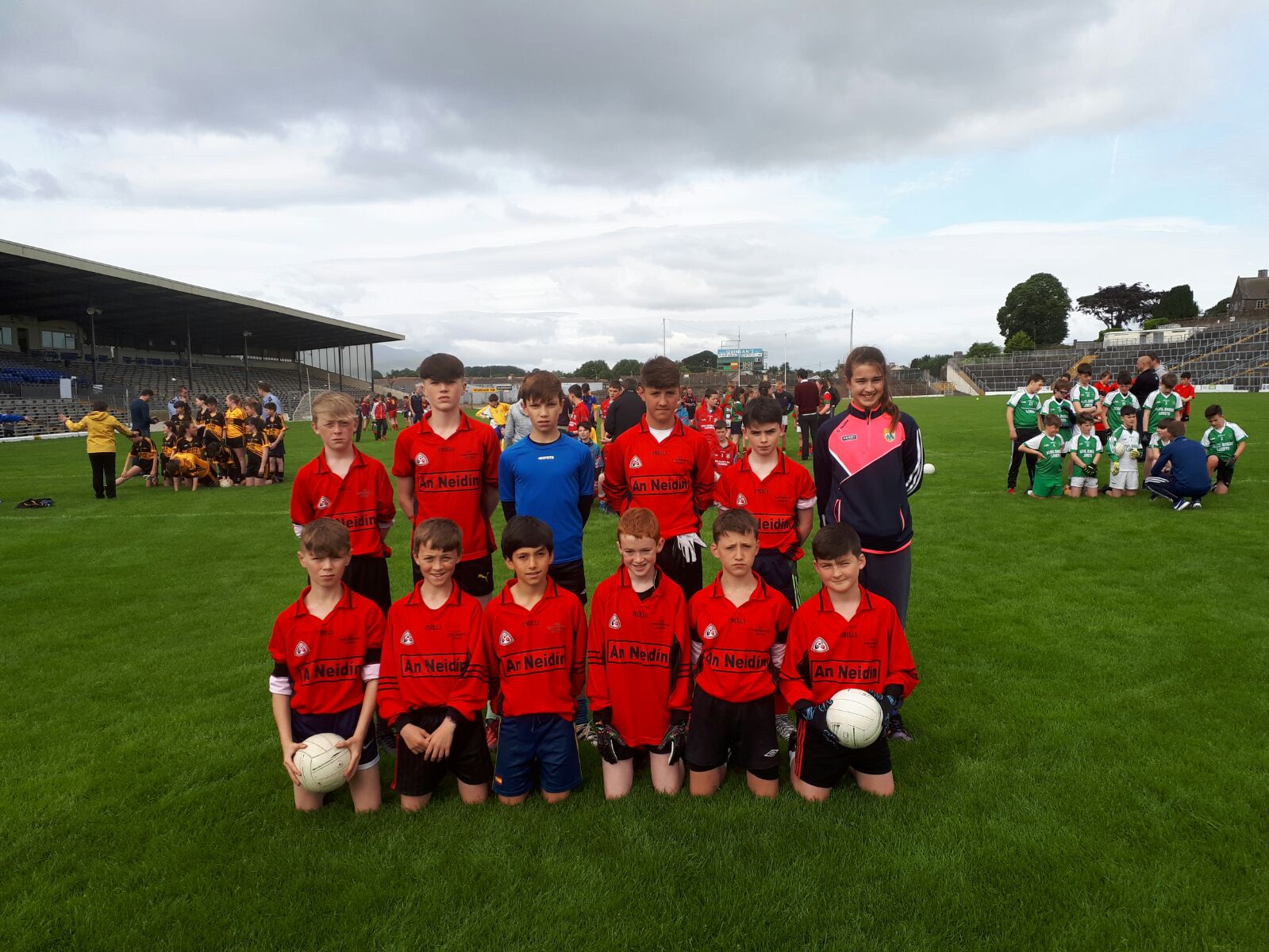 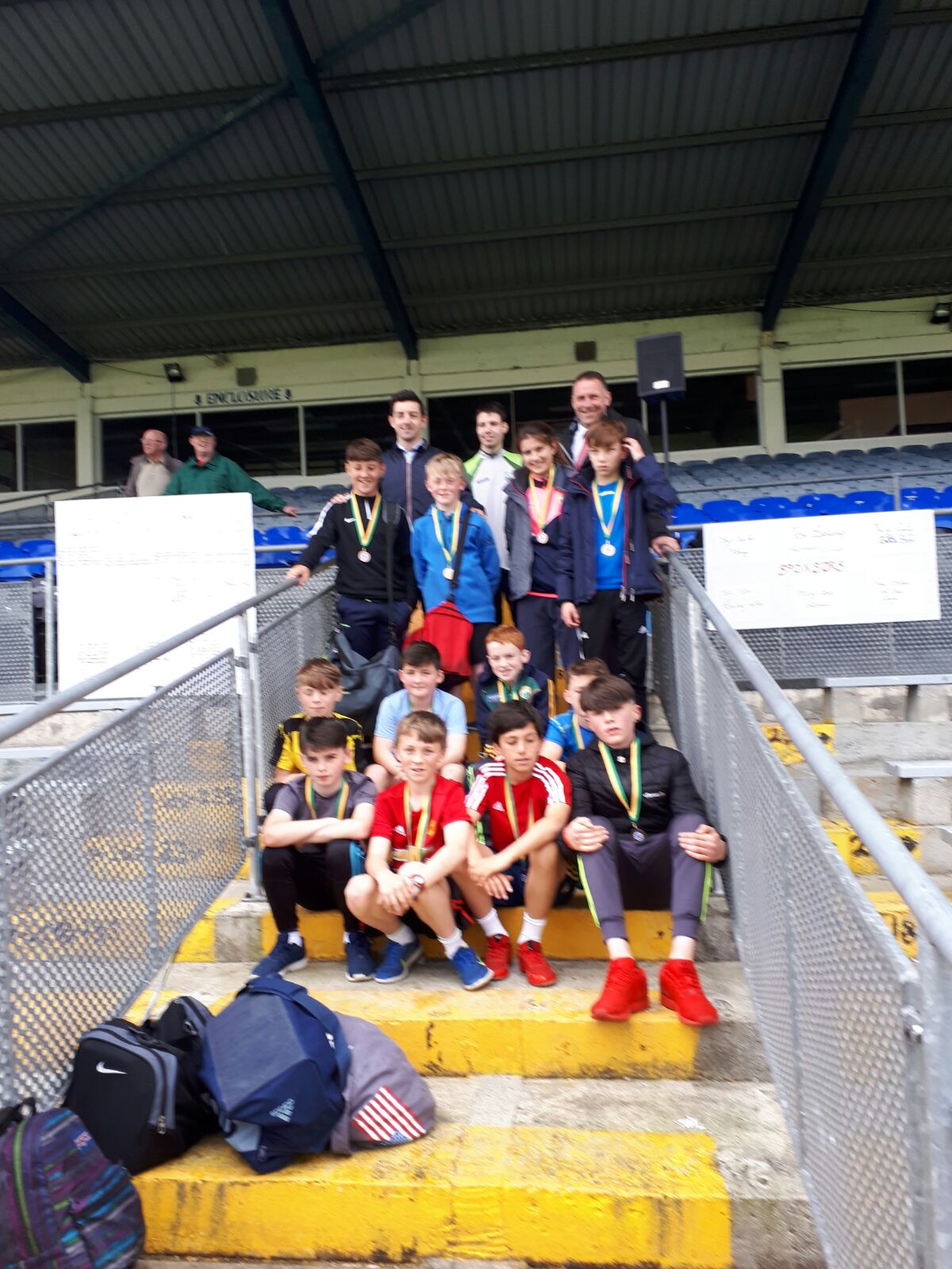 Our Erasmus+ Trip to Poland June 2017

Below are the accounts of our four 6th class pupils who travelled to Poland for five days in June as part of our Erasmus+ Project.

So on the 30th of May, we headed to Shannon.  We had something to eat and took a picture in front of the Paul O’Connell statue.  We arrived in Krakow at night time and were collected by a teacher who bought us to our host families.  My family were really nice.  The children’s names were David, Julia and Matthew.  The next day, Wednesday, we went to the school and were welcomed by a big ceremony.  Then on Thursday it was children’s day.  It was great fun.  On Friday, we visited Ustron.  It was so much fun.  We went tobogganing and on a ski lift.  Then we went to an animal park.  It was great craic!  On Saturday, we went to Krakow and so many cool places like the Krakow dragon and Schindler Factory and we went shopping.  The weather was really hot while we were there.  My favourite thing about the trip was my host family.

My trip to Poland – By Leah O’Donovan

On the 30th of May, we left for Poland.  We arrived at Shannon Airport, got on our plane and headed for Krakow.  Then we drove to our host family’s house.  The house was a three storey house.  It was all wood and decorated nicely.  They had a lot of holy statues.  They go to mass every Sunday.  There were two girls, the Mom and Dad and their grandmother and grandfather living in the house.  It was late so we went to sleep.  On Wednesday, we visited the school and went to the Pcizny.  The school was quite old and dark inside but they had interactive whiteboards so they were modern in that way.  They weren’t as disciplined or strict as our school and it wasn’t as big.  There were about 150 pupils.  They change classes every hour like in the secondary school here.  The school started at 8 and finished at 3 and they had a lot of breaks during the day.   In Pcizny, we visited an animal park and walked around the town.  On Thursday, it was children’s day.  We went baking in the Vocational School and played games.  After school, we went shopping with our host family.  On Friday, we went to Ustron.  There was a ski lift, a toboggan and an animal park.  Then there was the farewell party.  This is where we did our Irish Dance.  On Saturday, we went to Krakow.  We visited the Royal Castle and Chapel and St. Mary’s Church.  We also visited the Monument of the Krakow Dragon.  Then we had free time.  After shopping, the bus dropped us back to the airport and we went home.  My favourite part of the trip had to be when we went to Ustron on the ski lift.

My Trip to Poland – By Clara McElligott

We left Kenmare at 10.30 on the 30th of May.  We arrived in Shannon Airport and met the teachers at 1.00. We had lunch and boarded the plane at about 3.10.  The plane got delayed so we ended up landing at around 7.00.  We then met Sylvester, the Polish Teacher who got a shuttle bus and we drove to Jastrzebie-Zdroj.  There, we met our families who brought us to their houses.  The family’s names were Jacob, Paulina and Luke and the Mom and Dad’s names were Tomaz and Katarzyna.  The house was quite big and Jack’s house was right next to me.  They were very nice and treated us well.  They fed us a lot.  We had a lot of meat like sausages, chicken or fish.  The food was very nice.  For breakfast they had a selection of food that we could choose from.  The next morning, I woke up early at 6.15 and we went to the school which started at 8.00.  At 9.00 we had a welcoming ceremony where the Polish kids performed songs and dances.  In the evening, we went to an animal park, a palace and the town square in Pcizny.  When I got home, Jack came over to my house and we played volleyball.  The next morning, I had to get woken up by my host mom.  We went to school at 7.45 and at 8.00, we went to the local Vocational School.  There we went baking and we made croissants.  After that we went to a cafeteria where we ate the croissants that we made.  In the afternoon it was Children’s Day so we played games and watched performances by the students in the school.  There was also a performance by a magician and first aid and firefighting activities.  In the evening, we had a barbeque with Jack and played soccer with some of the neighbours.  On Friday, we went to Ustron, a town near Jastrzebie-Zdroj.  We went up a ski lift to the top of a mountain.  At the top, we all went toboganning down the mountain.  In the afternoon, we went to my host’s house.  We got changed for the farewell party and then we went into the city.  At the party, we performed an Irish dance and were given presents from the Polish school.  Then there was a disco and the other schools from Greece, Spain and Germany performed a dance or a song.  When we came home, I was exhausted and I went to sleep.  The next day was our last day and we had an all day trip to Krakow.  We visited the Royal Chapel (the burial site of the old Polish kings), the statue of the Krakow dragon and St. Mary’s Church in the city of Krakow.  Then we had free time and we went shopping.  An hour later, we were on the bus getting dropped to the Airport.  At the Airport, we ate and then boarded the flight.  We arrived in Shannon at 11.00 and we went straight home from there.  It was a great trip!

The Senior Infants got a lovely treat today when they got a visit from Mary Jo the Hen and her baby chicks May, June, Stripes and Phoebe.  They have also adopted some eggs to take care of to give Mother Hen a break and are taking great care of them.  Well done Senior Infants!  Also, we would like to say a big thank you to Betty Cremin for bringing them to see us!  A lovely experience!